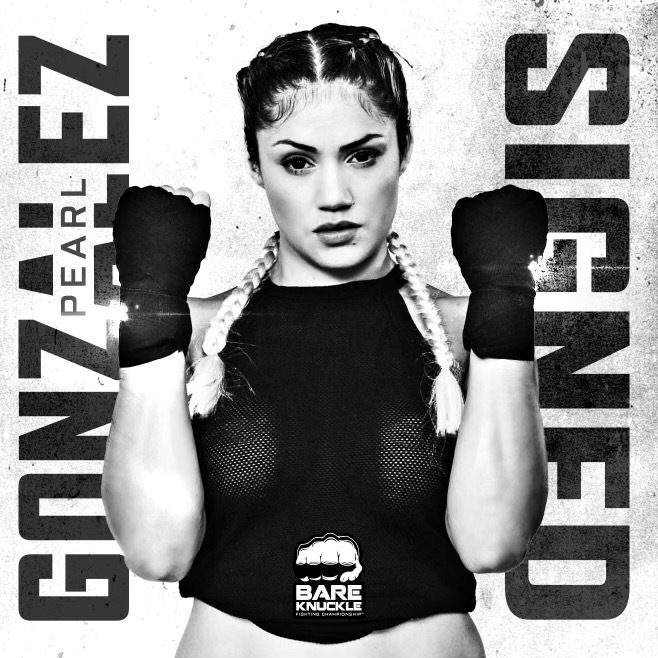 Bare Knuckle Fighting Championship (BKFC), The World’s Fastest Growing Sport, announced today the signing of MMA star, Pearl Gonzalez of Chicago, Illinois to an exclusive multi-fight promotional contract. Known as ‘The Chi-Town Princess’, the 34-year-old Gonzalez is one of the most popular names in combat sports.

“Pearl is a tremendous addition to our growing list of female fighters,” said Dave Feldman, President of BKFC. “Her best skillset is striking which makes this the perfect transition for her career. She’s very popular in the combat sports world both for her fighting ability in addition to commentating on different platforms and we can’t wait to start working with her.”

Said Gonzalez, “I made the biggest sacrifice of my life, packed up everything and moved to Brooklyn, New York permanently to train with the greatest female boxer in the world, Amanda Serrano. I promise to dedicate my life to becoming the next BKFC World Champ and couldn’t be happier to start this new chapter in my life!”

Born and raised in the fighting town of Chicago, IL, the attractive Gonzalez started her professional MMA career in 2012. Over the course of the last nine years she has found success in UFC, Invicta FC and Xtreme Fighting.

Details of Gonzalez’s first fight in BKFC will be announced shortly.

BKFC's warrior poet James Lilley is back at BKFC 27 in Lo...

Jake Bostwick braced for impact at BKFC 27 in London: "It...